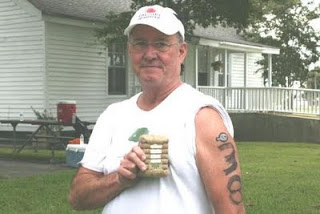 At last, after 6 attempts, I finished 3rd in my age group at the 26th Annual Cotton States Triathlon in Lake Providence, Louisiana.  The trophy I'm holding is the coveted miniature cotton bale.
I've slowed down my triathlon activity because of the serious heat we've had this summer.  I did the hometown Heatwave Classic, and like many others, posted a personal slowest record finish.  It didn't help that the old guys' swim wave started last, putting us on the run course at around 9:30.  By then the temperature was approaching 90 degrees. 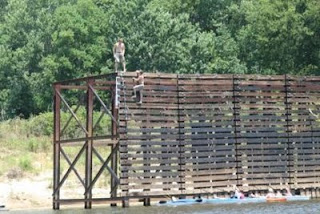 Earlier this summer, a group of us paddled down the Pearl River from the reservoir to Mayes Lake.  It was a great trip with the exception of a tough headwind for the last couple miles.  JD and Kyle couldn't resist a leap off the structure that protects an area of the bank from erosion. 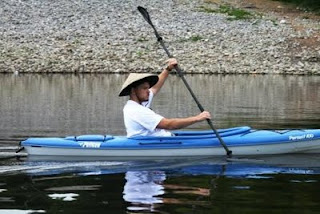 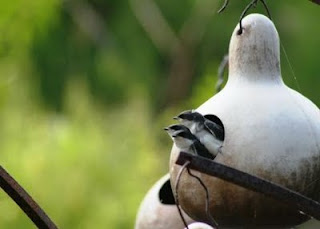 Above, three baby Martins in a gourd nest, wathching for mom and dad with food delivery. 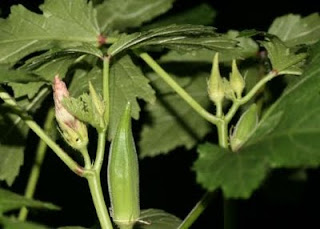 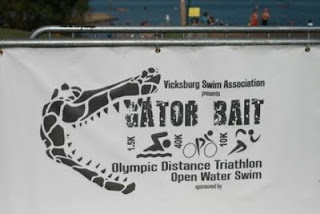 Paul and I took part in the Open Water Swim at Eagle Lake again this year.  Paul finished 3rd and I was 5th in the Male Masters division.  Kay Vee finished 3rd in her age group in the triathlon. 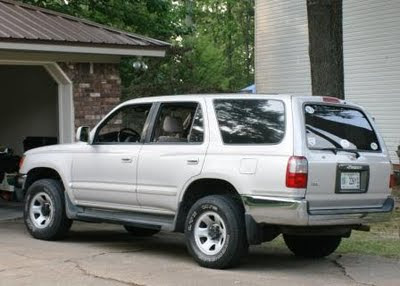 I finally said goodbye to my trusty 1997 4 Runner.  236,000 miles and nearly 14 years of faithful service.  The replacement is a 2011 Nissan Pathfinder Silver Edition.  Pretty nice. 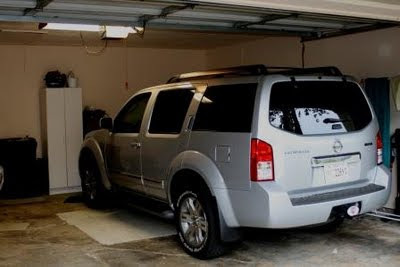 Here's a nice picture of Ruthie and Sheba at the park this spring.﻿ 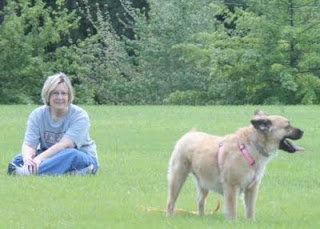 Posted by Billunit at 4:26 PM No comments:

I was blaming KayVee and Tea for my lapse in updating my blog, since niether has been very active on their blogs this year.  But KayVee planned and posted her hiatus, with good cause, and Tea has just nailed up two wonderful posts recently.  So, I guess it's time for me to get introspective again, or just fling out photos or race reports.

How about this? (forgive me Bill A.) 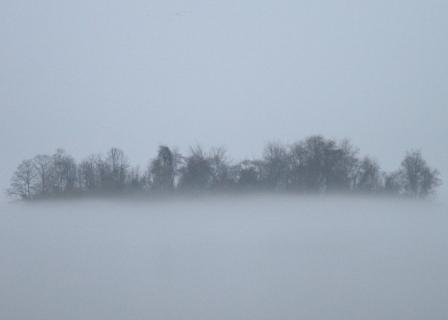 I took this picture in mid January at the end of the street close to home, on my way home after work, thinking I would see what the water and birds looked like on a strange weather day.

Here it is again on a clear day: 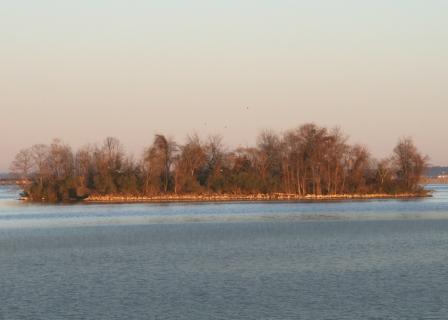 Both were taken from quite a distance, maybe 400 yards.  It's just a small island in Pelahatchie Bay of the Ross Barnett Reservoir where I run, bike, swim and canoe. I've lived here more than 20 years and know the area intimately.  I've seen it grow, or decay, from a mild suburb/fish camp community to an aggravating, overpopulated mess of sorts.  But with the bad also comes some good.  There have been remarkable improvements in the trails for walking, running and casual cycling, and the number of fitness-conscious citizens has increased dramatically in just the last two or three years.  Mississippi is the obesity capital of the world, and apparently more and more people want to be part of a change for health and fitness.

Well, I've managed to write a little to catch up.  Not much, but I've got a brisket and some eggplant to tend to.
Posted by Billunit at 7:52 PM No comments:

I kicked off 2011 with my second marathon, the local 4th Annual Mississippi Blues.  The weather was perfect, 35 to 45 degrees all morning, clear sky and just a light breeze.  My attitude was somewhat casual, since my training flew by without much dwelling on the pain and effort.  I didn't expect too much and didn't train for any special goals.  I had planned to run with Tea, who insisted she couldn't possibly keep up with me, the slowest runner I know.  Well, Tea had to cancel her trip to Mississippi this time due to circumstances beyond her control, so I just went out for a long run through Jackson with a couple thousand other folks.
Ruthie was there with the camera, and she and my Mom intercepted me along the course several times and took pictures.
,﻿
﻿
﻿Since﻿ Tea couldn't run and Kay Vee ran her own pace, I was on my own.  But not for long. Fortunately, I was able to find some superheroes to keep me company.  Wonder Woman is actually my friend, Tara, who allowed me to run with her at a 5 hour pace from about mile 3 through 17.  I stopped a little too long for water once and she got so far ahead of me I couldn't catch up.  She may have used her super powers. 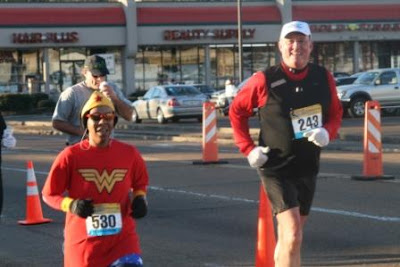 Superman was there, though it must have been incredibly boring for him to run so much slower than his speeding bullet pace. 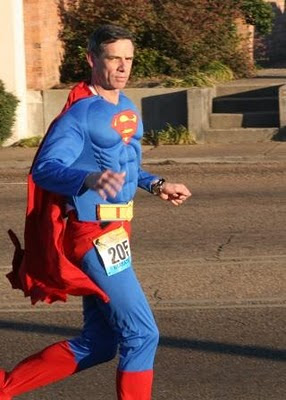 As I struggled to finish the final miles, I thought I would certainly never run another marathon.  I'm not so sure now.  The pain and fatigue are fading from memory, but the challenge and sense of accomplishment may be enough to make me do it again next year. 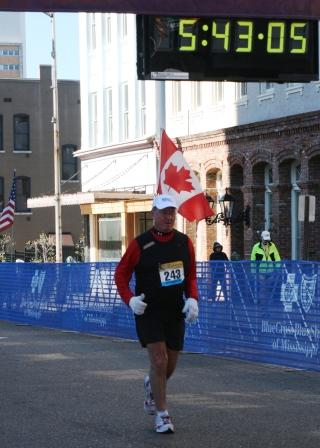 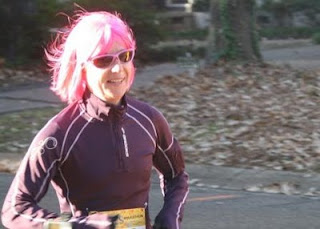 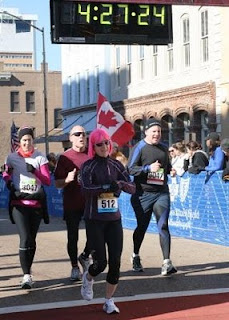