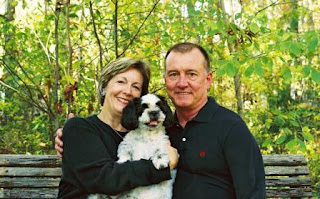 I remember really dreading the Thanksgiving and Christmas holidays when I was younger, and now there are still some aspects of forced family gatherings that can be inconvenient. But as each season passes and I'm more in touch with my ultimate mortality, I have greater respect for the threads that link us to the past and future through family.
To my knowledge I have fathered no children and can't say I regret having missed the experience. I'm told a human being never really knows love until they become a parent. Whatever. I have made some effort to be an influence on a few young people I've been fortunate enough to share my existence with and hope the experience was positive for them as well.
Anyway, I enjoyed the family gatherings more this year than any before. I feel like I contribute a lot with my fried turkeys and a few modest but thoughtful gifts. Wifeunit has such a positive influence on my attitude because of hers, and I'm grandfather age now since ML has two grandchildren. Maybe they will remember me vaguely as I do my grand/great ancestors. All the young people seem to tolerate or even enjoy the experience more than I did at their age.
We continue the family gatherings and expect one another to attend in spite of those who may not otherwise make the effort to stay close. It's a good thing and our family owes this to our mother's persistence. She is the matriarch, humble and loving, and the underlying spirit of a group of characters now 19 in actual or proposed number, not including a few visiting cousins, etc..
I wish everyone could be as fortunate.

Posted by Billunit at 8:40 PM No comments:

Catching Up On the Fall

Two weeks after our trip to Wiggins, Wifeunit and I returned to the coast the first weekend of November for Oceans Springs' Peter Anderson Festival. We've been to the festival several times, and I've never seen a bigger crowd. That's a good thing for the Coast and the festival, but not so good if you don't like long lines for food and beer. In the past, the gang from the Coast has always met at the park after walking around the festival all day. We take camp chairs and visit, eat sweet potato fries, drink beer and enjoy the free entertainment at the gazebo. This year was so crowded, there was no place to sit, and the music was much louder than I remember. 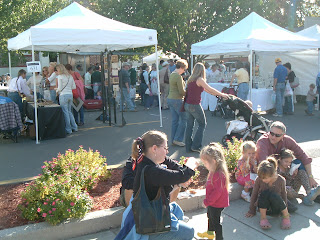 We still had a great time, stayed in Gautier with ML, the Ninja Fairy and Lilly Saturday night, and stopped for a while at Jamie and Bethany's in Wiggins on our way home Sunday.

Later in November, I got out early on a cool bright Sunday morning and went in search of anything worthy of a photograph. I saw there were several Great Egrets roosting below the reservoir spillway, so I decided to try to creep up on them and maybe get a nice picture. 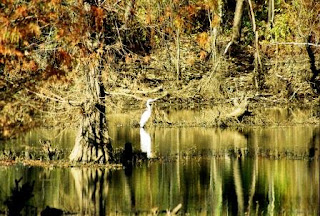 While creeping in the weeds, I spotted this little duck. 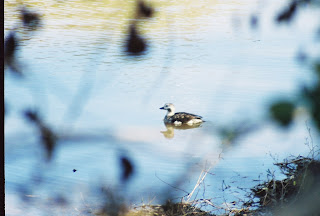 I sent this and another to an expert birder to see if he could identify it. He replied saying it was an Oldsquaw, or Long Tailed Duck, female. Turns out it's a rare or uncommon bird for Mississippi, and I was asked to submit my photos with some paperwork to the Big Birder of our state who keeps up with all the records.

On the first weekend of December we made another road trip to the Delta. 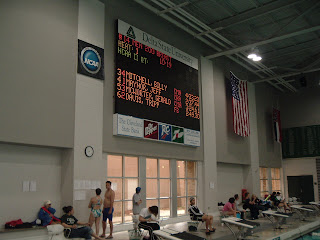 If you look closely, you can see my name on the big electronic board at Delta State's superfine swimming facility. Wifeunit and I and my 2 teammates from the Flowood Y Fighting Flounders went to beautiful Cleveland, Ms. again for the Southern Masters Short Course Meters Championship Swim Meet. It was my first official swim meet, and I finished just about where I thought in every event - dead last. That's ok though, since I may have won something in my age group. Everyone from age 18 to 80 competes in the same race. It was fun and gave us a chance to do some shopping at the famous pottery shops of the Delta, Peter's Pottery in Mound Bayou and McCarty's in Merigold. (I'll post another story about Wifeunit's long lost cousins of Mound Bayou when the photos are ready)

On our way back home we were able to spot several Northern Harriers, a bird sometimes called a Marsh Hawk. Harriers are apparently quite common in wide expanses like the Delta, but I had never seen one, or knew it if I had. I didn't get any pictures, but they're easily identified by their flying close to the ground over brush, listening for mice and birds to pounce on. They are more slender than most hawks, and have a white patch on their tail (coverts) that can be seen from a good distance. Below is a great pic from a Google search. 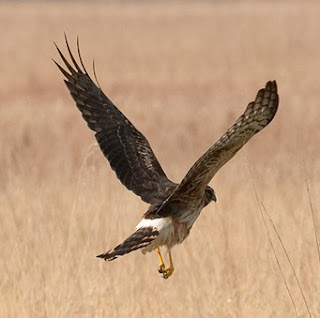 Thinking back, I know I'll always remember the trip for the nice, peaceful feeling I had driving home - the sun a fading red glow in the clear western sky, the Family Truckster all cozy and warm while the temps outside fell into the low 30s, cruise control set at 60 mph on Highway 16, listening to Garrison Kiellor's Prairie Home Companion, as I drove right past my exit to Hwy 43 and into the dark.