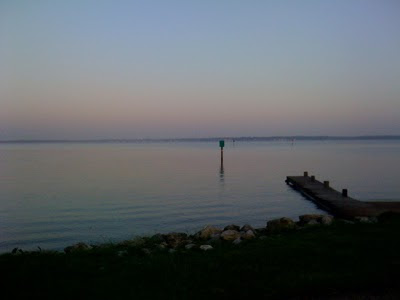 I visited this pier at the Fannin Landing boat launch several times over the last few weeks. Looking west, it's roughly 3.6 miles across. Some mornings the water is smooth as glass all the way to Madison Landing, and some days it's rough with wind and waves. I kept this photo as my desktop at work, a constant reminder of the coming challenge.
Months ago, Kate, Paul and I stopped while riding our bikes and discussed the possibility of doing a big open water swim here, maybe swim out a half mile and swim back. We have talked about a big reservoir swim since we started our annual Lake St. John swims 4 years ago. Our Flounder swimming partner, Mack talked about swimming across some day. Then in April, Kate forwarded an email message to me about a 5K swim in Pensacola, and suggested that maybe we weren't brave enough to accept that kind of challenge. I knew then she had thrown down the gauntlet. As I stewed about it for weeks, Kate phoned the Reservoir officials and learned we needed only to submit a plan describing our intentions, and if there was no fund raising or official advertising as an event, we could proceed.

I wrote a plan. Kate approved. I sent the plan to the Rez officials and sent a copy to several others who might be interested in swimming or kayaking. Our plan was simple: a small number of swimmers, each escorted by a canoe or kayak, would swim across at 6:30 AM on July 11, accompanied by a ski boat.

None of us had ever done the distance before. We swim lots of yards in the pool each week, and we do our Lake St. John distance of less than 2 miles.

The plan was evolving, with a few people curious and some willing to paddle with us. The most dangerous thing that could happen, (besides getting tired and drowning) was the possibility of a 60 mile per hour bass fishing boat streaking through our long line of swimmers without seeing anything until someone was killed. For this reason it was my feeling that more boats escorting us would mean more visibility and protection from being run over. Safety in numbers. Stay in a tight group and don't spread out.

Our Mississippi Heat Triathlon Team President, Amanda, offered to put the word out via our club website and newsgroup. I declined the help but promised to keep her posted. There are 200 club members, and we couldn't risk a large turnout for the limited boat support that was committed. 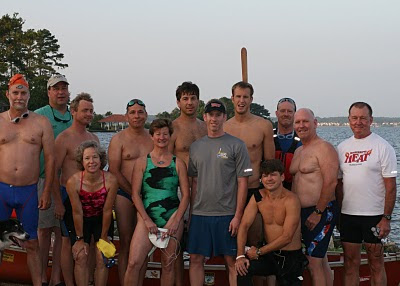 The fateful morning arrived and brought with it 8 to 10 mph wind from the southwest and 1 to 2 foot waves. 10 swimmers, 9 kayakers and 2 canoe crews were waiting and nervously preparing themselves. John brought his ski boat on a trailer, and Dan and Mark T came across from Twin Harbors in a ski boat. Roy from the Jackson Yacht Club brought a boat and big buoys they use for their regattas, making it easier to see a route across. I was very pleased with our support turnout. We had a spotter for every swimmer and three fast support boats. Should we still try swimming into the wind and waves? 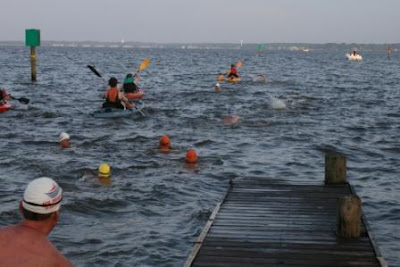 I asked some of the kayakers and canoes to put in and see if it was too rough for them. I got a big "thumbs up". Someone said "Let's go!" 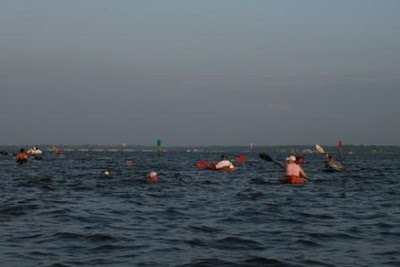 We went. KV and I were last in the water. She was originally only there to watch and get in a little open water practice. I promised to stay with her, and we swam about 45 minutes before asking her canoe escort, Harry and ML to call over a boat. She sent me off with a yell, "Go Billy!" I'll never forget the sound of her voice in the middle of miles of water. 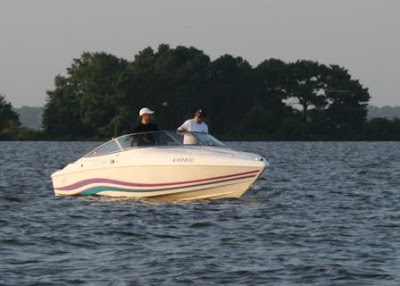 I learned that our boat support fended off a couple of boats passing through, or just making sure they were slow and watchful. I can't say enough about our boat support and how much more secure a swimmer feels, miles from shore, with boats all around, imagining they are all watching out for you. 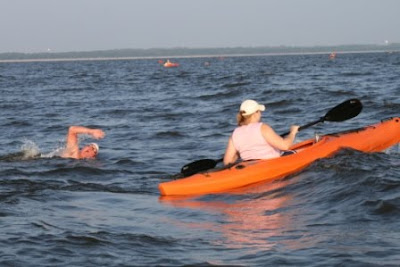 Pictured above are me and Susan, my kayak escort for two open water swims in a row. After years of working together and sharing a great friendship, I feel very safe with her paddling next to me, and that orange birthday kayak is easy to see. 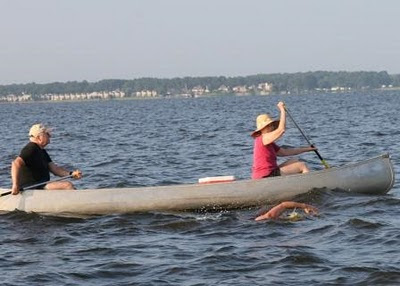 KV was accompanied by Harry and ML, veteran crew of dozens of gnarly river trips. I suspect this was their first big lake crossing. ML and Harry are family, and swimming athletes from way back in the early Courthouse and Sunkist age. They came up for the swim from the Gulf Coast. Susan brought kayaker family, Patsy, Will and his friend from Cutoff, Louisiana just to help out. Canoe advantage: bigger cargo capacity. Kayak advantage: fast and nimble, and easier to handle in the wind without two paddlers. 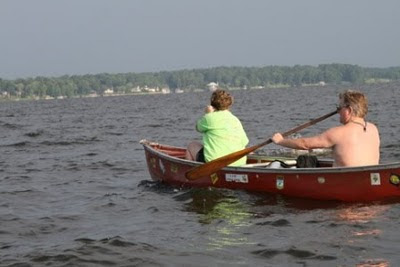 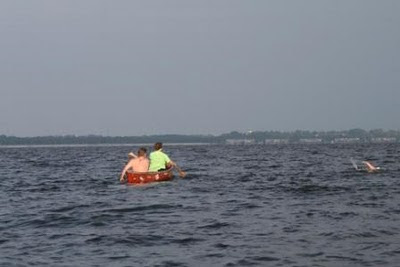 Ruthie and Minor escorted Kate, who is, to my knowledge, the only woman to have accomplished a swim across the Rez. Now, there may have been a few over the years, but I'm not so sure about it. Kate as a swimmer is nothing short of amazing in terms of guts and tenacity.  She's also pretty damn fast. 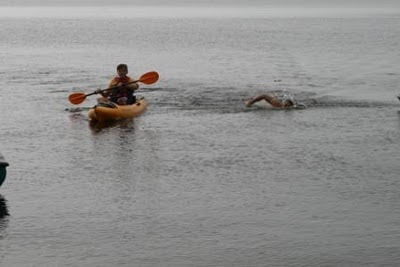 After a little less than two hours, Tripp is escorted into the boat launch by Will.  The wind had died and the water was smooth and pleasant for the finish on the west side of the lake.
Here's all the finishers coming out of the water, tired but happy! 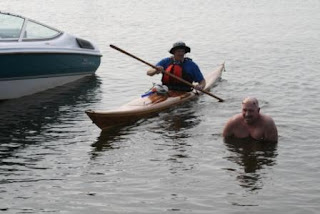 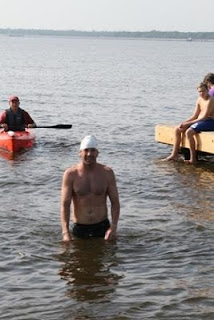 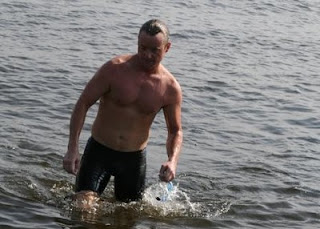 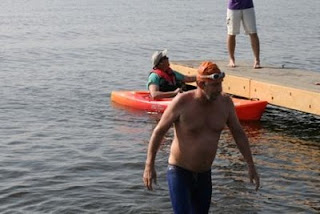 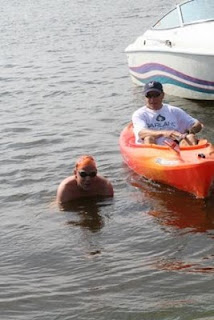 Keith Davis
and finally me. 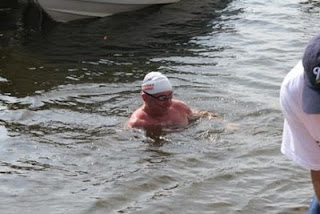 My legs had cramped so much I could hardly stand, (and it was slippery), but Mack was there to lend an older Flounder a hand. 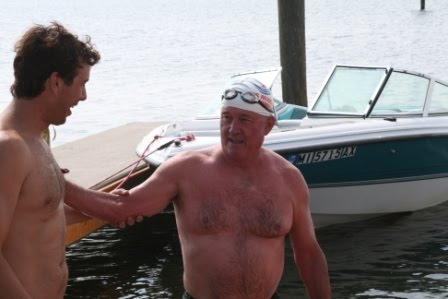 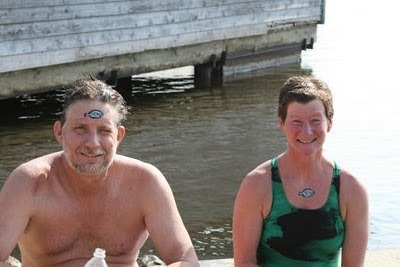 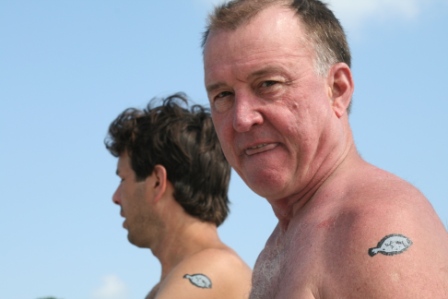 As the days have passed since the swim, I still think of what we did as an awesome accomplishment, made even more so by all the fear and anxiety I experienced during the days before the swim.  I worried about all possible things that could happen, not especially to me, but to those who might have trusted that we really knew what we were doing, when at least I knew we were taking a big chance.  I was never confident I could swim the distance, but I reached a point out there, just as one does running a marathon or in any other great endeavor, that I could not allow myself to quit.  If my body failed, if the arms would not take another stroke, then I would surrender.  But my 5 years with my wonderful swimming friends, the Flowood Flounders, gave me the strength to make it.
I am still so thankful to all those who supported us: Wifeunit Ruthie, ML, Harry, Susan, Will, Patsy, Richard, Roy, Kay Vee, Dan, Mark T, Minor, John, Bill and several others I never really got to meet.
I'll keep going back to that boat launch to look across and wonder how we ever did it.  My eyes will blink with pride as they do now.
(photos by Ruthie Mitchell and Shelley McLeod)
Posted by Billunit at 8:30 PM No comments: