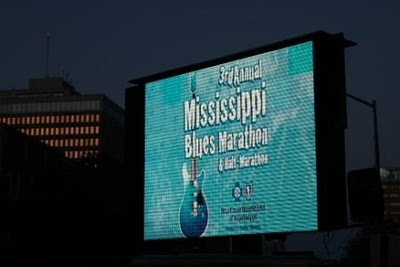 I awoke this race day morning at 2 AM after a bad dream, one in which George Carlin ran with me in the marathon, smoking cigarettes and coaching me along until I couldn't keep up, got lost and disoriented, and missed the rest of the race. I checked the alarm clock and found I had another two hours before the real marathon. What a relief! I hadn't realized that finishing this race was so important to me.

The weather was a huge factor today. "17 degrees" said the NOAA website at 4:30 this morning. Runners were in town hoping to escape the Frigid North and run a race in the Sunny South. Last year the temps were in the upper 50s, uncomfortably warm and humid for a marathon.

I've been training for the race with the help of KayVee, friend, co-worker, ally, veteran marathon runner and Ironman finisher. KayVee generously offered to run with me today. I had no idea how much I would appreciate her being there.

We met with a group of other local runners at a big downtown hotel lobby a few blocks from the race start. Nobody was wanting to stand around for long out in the cold at the starting area. We donned big black garbage can liners for extra warmth when it was time to move up to the race start. (KayVee and I had the best style - good 55 gallon quality from the trunk of Ruthie's car, thick plastic and pointy shoulder corners like a goofy costume).
You readers who are runners and marathoners know the feeling of waiting for the start. My first marathon at 55 years old, training somewhat abbreviated by hip aductor soreness, was about to start and I was worried about even finishing.
The starting horn went off after a blues guitar version of the National Anthem, and we ran smoothly and quietly west on Capitol Street, the main drag of a town burned to "Chimneyville" during the Civil War. The sun made the cold air bearable and I was thoroughly enjoying the run. We were impressed by a drum line of members of the Jackson State University band braving the cold and pounding out a spirited cadence for us.
We wound through the downtown streets and into hilly Belhaven, towards our personal cheering section at Kate's house. Ruthie, Kate and my Mom were there at the curb with red noses and mittened hands, jumping and cheering. I ditched one of my 4 shirts and an inner pair of gloves there, prematurely thinking we would be warming up well in the bright sun.
As we enjoyed a long downhill on to Lakeland Drive, the clouds began to cover the sun, and the the cold became a presence again. A snowflake would occasionally blow by as we ran a little ahead of the 5 hour pacer.
We passed the halfway point at almost exactly 2:30, a pace to finish under 5 hours as I had hoped. KayVee, the "Queen of Negative Splits", must have thought we were right where we needed to be. However, I could tell that I wouldn't be able to maintain that pace and certainly not a faster one.
We headed north on Ridgewood and into Eastover, and the short hills began wearing on my legs pretty badly. The weather was settling into miserable and I began to slow down, needing walk breaks more and more often. Ruthie and my Mom brightened us up for a while, lurking on side streets in the car, jumping out to take a photo and cheer us on. 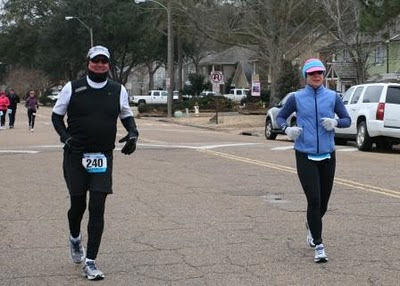 Pounding along painfully through the second 10 miles, I was not enjoying myself, knowing we would be well over 5 hours finishing and my legs already protesting the smallest hill climbs. As we ran beyond the 20 mile marker, we shared conversations about anything that came to mind. KayVee kept urging me on to run to the next traffic light, and soon we were within sight of the green dome of the Old Capitol. I knew then I would finish, and might even have enough legs left to run through the chute. 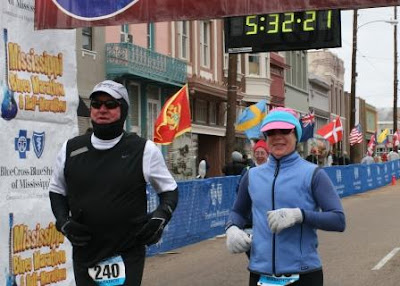 So I finished my first marathon. Five and a half hours of running (and too much walking). I'm not disappointed, really, in not finishing under 5 hours. I knew it would be a real surprise if I had that kind of stamina. My half marathon PR is 2:19, so it's doable, but maybe next time. After that dream with George Carlin, I am delighted to have finished at all, especially without injury or mishap. 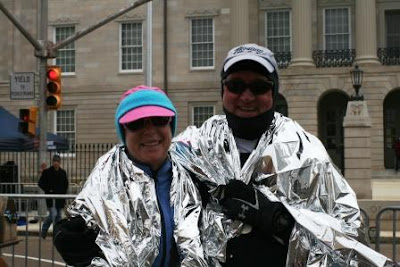 If asked if I would do it again under the same cold conditions, eventually dreading every footstep, drinking water from cups with icy slush, eating power gels too hard to squeeze out of the packet, I would definitely say, "Yes! But only if KayVee will run with me!"
Thank You KayVee!
Posted by Billunit at 5:53 PM 3 comments: