The work week is shorter when the weekend leaves you with a feeling of peaceful satisfaction. Wifeunit and I left home Friday at noon and drove to Cleveland, Mississippi, home of Delta State University. We went so I could participate in the DSU Triathlon and just to get out of town for a change. Our August wedding anniversary weekend in New Orleans was cancelled due to Wifeunit's mother's illness, so we were ready for a road trip.

The drive was nice - mostly light traffic and good weather. I got a Delta driving lesson from Wifeunit, which made sense to my stubborn self. When you need to pass farm equipmment on the long, straight, flat highway, and you can't see approaching traffic very well because of the mirage effect on the road, just get out there and go! If something's out there, you'll see it soon enough to whip back into your lane.

We made Cleveland in time to hit the Sharpe Street shops, the Crosstie District, diagonal parking, old style, small town thing. It's great that some of these towns in the Delta are still prosperous enough to preserve themselves. Many have just decayed from being abandoned. We dined that evening at the Airport Grocery, an interesting restaurant with old signs and assorted junk from rural yesteryear hanging about. Their junk looked authentic and in proper context, not what you see at some franchise eatery like Ruby Tuesday. The food was Delta home style - barbecue, okra, corn, catfish, etc., and lots of it. It's a very casual atmosphere, of course, and the price was great. All we could eat, 2 Coronas, tea and good service for less than $40. I had never heard of the place but it is apparently famous for hosting Delta Blues musicians. Blues just isn't one of my things, but the Airport Grocery just made my short list of favorite places to tie on the feedbag.

Our hotel accomodations for Friday night were a challenge for Wifeunit. We were in the room no more than 5 minutes before she had the front desk on the phone for a new bedspread without cigarette burns. Then, when the luckless employee came to deliver the spread, Wifeunit discovered a hair (maybe even pubic) on the sheet! Wifeunit, seasoned traveler that she is, has received free rooms and meals as compensation for innkeeper transgressions less than this.

Next morning, at the beautiful Delta State University natatorium, began the triathlon. DSU has a first-class swimming and diving facility. 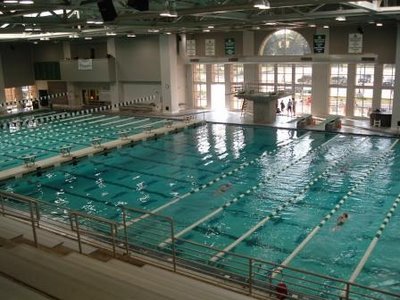 The weather was a little warmer than I had hoped for, about 70 degrees at the start, but I'm sure it was near 80 for the run leg. The swim went well, 500 yards sharing a lane with the eventual Overall Masters Male Winner (whom I outswam, I might add). They even had lap counters, which helps tremendously.

I hopped on my bike too soon, before the mount/dismount line and got a warning and hopped right off. It's amazing that you can make goofy mistakes so easily after a hard swim. At one race I put my helmet on backwards. The bike course was mostly straight and flat, but really rough in some spots. I averaged about 23 mph going out with the wind, but only about 18 mph coming in. The turnaround was just a spot in the narrow road and I fell making the turn, but didn't get injured. I lost about a minute trying to get my Aerodrink container back in its rack.

The run was flat and easy but hot. I finished a little ahead of my training partner, Paulunit, since he's had a foot injury and can't run well. He beats me swimming and cycling every week. We were 2nd and 3rd in our age group, and Paulunit's wife gave me a new name, Pink Barney.

Posted by Billunit at 4:50 AM No comments:

Wifeunit and I joined a dozen or so other Jackson area birders for the monthly bird walk at Mayes Lake last Saturday morning. We hadn't been on a walk since spring of 2005, I believe. It was nice to see our friends again and meet new birders. I didn't expect to see any unusual birds at this early time in the fall migration cycle, but we got a glimpse of some warblers and vireos we rarely see at home.
Posted by Billunit at 5:43 AM No comments: 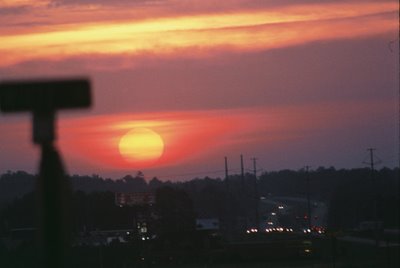 This page needs some color to brighten it up. This is an August sunrise from Wirtz Road in Rankin County near my home.

My early morning exercise schedule allows me to see some unusual things from time to time. I could say I'm in training for a triathlon in two weeks, which is true, but I will continue my workouts even after the triathlon. Since January, 2002 I've been getting up at 4 AM for some sort of exercise. I let myself sleep until maybe 7 on some Saturdays, but it's now a habit to be up before the sun.

My routine for the last few months has been a 5K run on Monday, Wednesday & Friday, 2300-2800 yards swimming with my Masters club on Tuesday & Thursday, and usually a 36 mile bike ride on Sunday morning at a 17-19 mph pace.

I've entered 5 triathlons and 7 or so 5K races and survived them all. That's actually the best I can say about my efforts, since I'm no speedster. Swimming is my strongest sport, and I owe that to my great friends in the Masters club and constant encouragement from my wife and sister. The cycling is fair, considering I've only been riding a year. My running is the weak link. Lately I've been really working on improving my speed and it's paying off, I think. With a little help from some cooler weather, I cut my 5K time down this week by over 1:30. I hope to run tomorrow or Wednesday under 30:00.

I ran a 5K last year in 26:57. The course was flat and the temperature was 39 degrees at the start, so my poor performance this summer hasn't gotten me too disgruntled. I think my training course is pretty demanding, too. It's been a nice week and a cooler day than we've seen in a while. A fine day to join the legions of bloggers and learn to record my thoughts and observations, post some photographs and share my favorite entertainment with anyone bored enough to stumble by.
Posted by Billunit at 3:58 PM No comments: