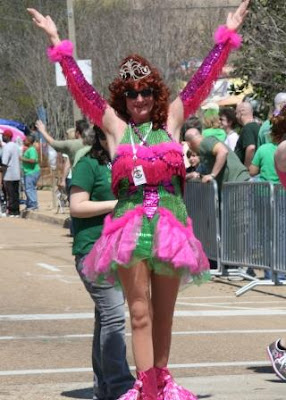 I commented last year that I didn't care to participate in the famous Mal's St. Paddy's Day Parade here in Jackson, Miss. It has become such a huge success that it can be a huge pain in the neck to deal with. The traffic, the crowds, the drunks - all the common hazards of a big celebration. 25 years ago I would have been there amongst the revelers, and I was, back in the day. Now in 2009, my sister, ML has been initiated into the celebration as a VIP of sorts, having been a friend, Girl Scout veteran, high school classmate, etc., of the world famous H.R.H. Jill Conner Brown, THE Sweet Potato Queen.
See the website: http://www.sweetpotatoqueens.com/ if you don't understand the significance, and after doing so you still may not. ML and other high school friends marched in the parade as The Queen's Revirginated Classy Mates.
There were zany things associated with this year's event, like a wedding on the float during the parade, the Classy Mates serving as bridesmaids.
Anyway, it was time to attend and pay homage, and I could run the early morning 5K and meet up with the Mississippi Heat Triathlon Team contingent with an area staked out with snacks and drinks. Fellow Flounder KE promised prime parking at her office a sweet potato's throw from the parade route and directly in the parade lineup area.
Wifeunit was laid up with a mysterious illness, so I headed out at 7 am for downtown Jackson and the St. Paddy's Day 5K. The race is very popular and well attended, and it's fun to run through the city with the tall buildings, the State Capitol and other landmarks decked out in a spring bloom of azaleas, dogwoods and lush green grass.
I ran a leisurely pace enjoying the cool air and scenery, and milled around post-race with friends. ML called and reported her position and marching orders, and I called KE to review the parking situation. I had loaded my bike in the truckster to ensure mobility in case I needed to keep claim on my parking spot, which did turn out to be crucial. I had planned to bike to the nearby YMCA for a shower, but KE offered her home facilities even nearer and less hazardous, with coffee and a pleasant garden seat to kill a little time before the parade.
To be continued...
Posted by Billunit at 5:17 PM No comments: