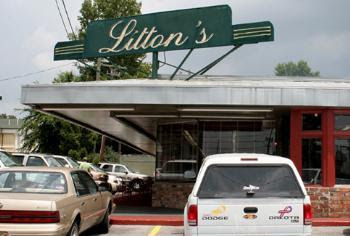 On our last day in Tennessee we drove to Knoxville, home of Big Jean, my life-long friend and mentor. My parents were, of course, most responsible for my childhood development and raising me with honorable values and work ethic. But Big Jean has had a different type of influence on my life in the 38 years I've known her. I was her daughter's boyfriend in my teenage years, a time when nothing my parents had to say meant a thing to me. She was a worldly and wise figure to me, and though I was not to pursue a college education until much later, she recognized my curiosity and potential and steered and encouraged me to better things. The opportunities I have had in my life are largely due to "going through open doors" she pointed me toward.

We drove the interstate from Chattanooga north and I was amazed at the never ending suburbs approaching Knoxville. I'm really sick of the urban sprawl around my home in Mississippi, and I have to remind myself that my neighborhood was built in the 70's in a pristine forest by the water, I'm sure to someone's angry dismay.

We arrived at Big Jean's shortly after noon. Big Jean seems to always be in great spirits, in spite of current health challenges. We enjoyed a burger at the famous Litton's Market & Restaraunt, shared a short but wonderful visit and headed back south towards Chattanooga. We decided to try to make it all the way home, and arrived at around 9 that evening.

It was a great trip, and I'm glad I do this blog so we'll have a means of enjoying the memories.
Posted by Billunit at 10:07 AM 1 comment:

Even on a holiday weekend vacation there is no escape from the half-marathon training plan. I needed to do an eleven mile run while we were in Chattanooga. So, before our trip I Googled the Chattanooga Running Club and found that a marathon had just been held at the Chickamauga Battlefield nearby. Then I found the blog, Georgia Runs, and was assured by Brian's description that it would be a great place to run.


After our Rock City/Ruby Falls adventure we drove to the park and asked at the visitor center for maps and distances and found there are numerous possibilities for running and hiking. The park is full of trails and narrow roads, including a well-marked tour of the battlefield monuments and features. The tour is about 7 miles, so we used the truckster's odometer to measure along the route and continued another 4 on our own. It worked splendidly. Wifeunit had her map with my water stops marked and approximate times and distances. 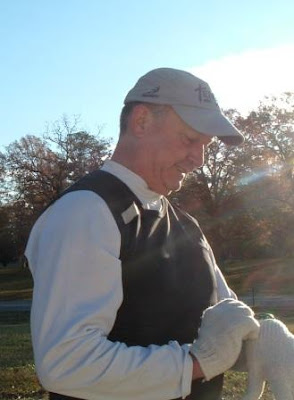 Early the next morning the weather was great - 35 degrees and clear - and I started my run. Wifeunit listened to a book on the car CD player and drove off through the park, lying in ambush to snap pictures of me and the other creatures. The deer in the park are remarkably tame, surely aware of their relative safety from hunters. We sometimes saw herds of 20 or more in the open areas of the park, grazing calmly like cattle on a farm. 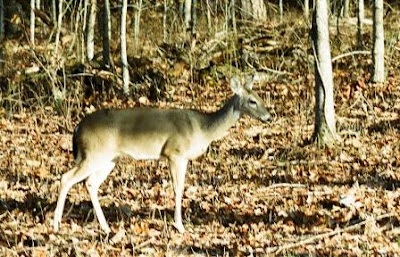 I found this to be my most satisfying run so far. There was almost no traffic to deal with, while the curves of the roads, the deer and historic monuments took my mind off the work of running. I don't use an Ipod, so any distraction from the grind is great. The park has only one bothersome short steep climb, a beautiful spot known as Snodgrass Hill, but the rest of the road is mostly flat and easy. 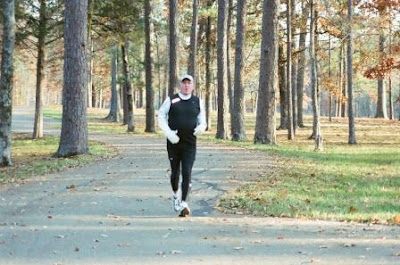 After the run we retreated to the hotel, ate a quick lunch and took nice nap. The remainder of the day we spent at the Chattanooga Aquariums. That night we ate at a fabulous restaurant near the hotel called Niko's Southside Grill. If you're staying in downtown Chattanooga, give it a try.

Posted by Billunit at 8:44 AM No comments:

Our drive continued from Iuka, Mississippi to Chattanooga, Tennessee via the Natchez Trace and Highway 64. I avoid the interstate highways whenever possible. I hate the big trucks and traffic, and it just seems less stressful to take a back road. Hwy. 64 isn't exactly a back road, but it's the way I chose to go. As we left Mississippi we encountered patches of heavy and moderate rain all the way to Chattanooga. I had planned to take a back road into the city, but because of the weather and darkness, I thought it safer to take I-24 for the last 20 or so miles into the city. Ten miles from town the traffic on the interstate came to a complete stop. We spent the last hour of our day-long drive in gridlock, within sight distance of our destination. 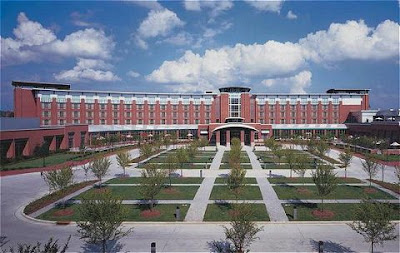 The Chattanoogan Hotel is a nice place in the middle of downtown. Since it was a holiday, there was hardly any traffic, and nobody at the bar. What a great end to a long day - chatting with the bartender while sampling microbrewery draft beer and appetizers.

The next day was spent doing what tourists do, seeing the cheesy attractions. Unless you're like us, children of the 50's and 60's with more curiosity and spending money than good sense, you will avoid Ruby Falls and Rock City. In the South during the 1960's, a traveler on the old highways could count on finding "See Rock City" painted on the side or roof of a barn along the way. (Follow this link if you'd like to know more http://www.two-lane.com/seerock.html ).

Neither of us had ever seen these legendary wonders, but we both had vivid memories of the roadside advertising. Now that mission is behind us, and we have a "See Rock City" birdhouse on the basketball goal post in the front of our home.


We had a great time, though. I was surprised at the number of Asian tourists, particularly Japanese. They seemed to be enjoying themselves. Pictured below is Wifeunit capturing a rare moment - a Rock City Gnome, carelessly vulnerable to keen-eyed tourist photographers. 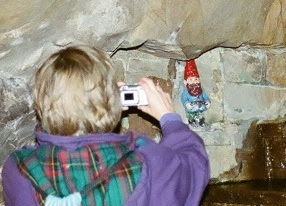 Here's a look at one of the breath-taking dioramas depicting one of the industrious "3 Little Pigs". There were lots of these Mother Goose/Fairy Tale characters around. It took us minutes to appreciate the beauty of it all. 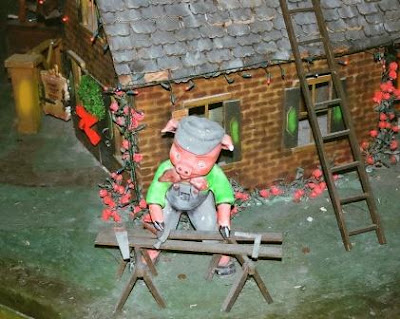 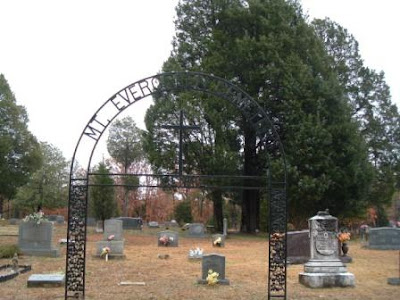 Another branch of Wifeunit's family has inhabited the northeast corner of Mississippi around Pontotoc, Biggersville, and our next stop, Iuka. We were in search of the elusive Toenail Cemetery, where we hoped to find the gravesite of great-grandmother Akers. There was some doubt whether "Toenail Cemetery" actually existed. Well, it does. It has since been renamed Mt. Evergreen, and it's full of old markers from the 1800's, many too weathered to read. We learned there are Confederate soldiers buried there who were killed at the Battle of Corinth nearby. We didn't find the Akers gravesite but it may be there, just not identifiable.
The word "Toenail" is barely legible in the photo above, just below the cross in the wrought iron arch. We hope someday to find out the significance of the name.
Posted by Billunit at 2:49 PM 1 comment:

We loaded up the family truckster and hit the road again for the Thanksgiving weekend. Chattanooga was our destination, but on our way up the beautiful Natchez Trace we stopped at Birmingham Ridge north of Tupelo. Wifeunit has stayed in touch with family living there but has never visited. Those family members have been part of the land for several generations. We had intended to call and announce our visit, but couldn't catch up with anyone. So driving in a light rain we decided to just go down what we thought was the correct road, just to get a look at the area. I said to Wifeunit, "That might be their house up ahead. We won't stop unless we see someone outside." There on the front porch, staring at the falling rain were the relatives we had sort of hoped to see, but now we were caught staring at them. I could do nothing but turn around and go back. We had a nice visit for an hour or so, while other relatives from around the ridge must have noticed our presence and dropped by to look at us. If you're guessing this was a rural area, you are correct.
Posted by Billunit at 2:09 PM No comments: